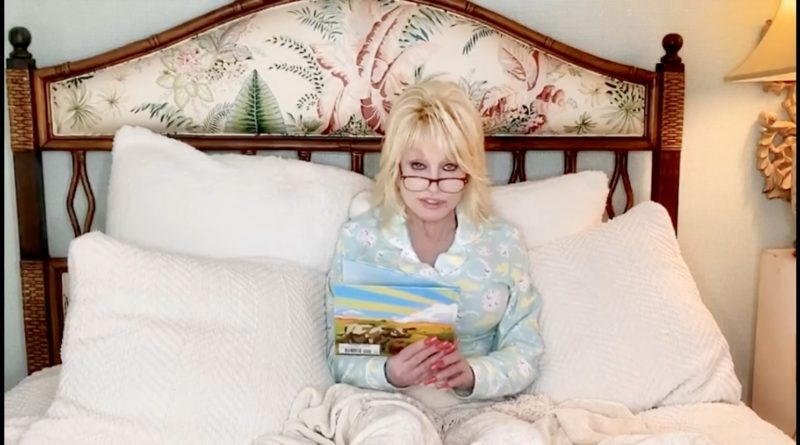 Dolly Parton has joined the chat.

“Hello! I’m Dolly Parton, the book lady from the Imagination Library, and I’m going to be reading a very special book today,” the country singer and hipster icon begins, resplendent in moon-print flannel pajamas and her trademark glossy manicure.

Parton kicked off her “Goodnight with Dolly” read-aloud series April 2 with the classic The Little Engine that Could, complete with infectious laughter and a little Engine-inspired ditty at the end. It runs for 10 weeks on YouTube, with new episodes every Thursday. Each segment features Dolly Parton reading one of the titles from her non-profit Imagination Library, which mails books to kids for free from birth until they enter school.

She’s far from the only celebrity lending her famous face and voice to books, though.

With millions of families staying at home due to COVID-19, there’s been a corresponding explosion of online read-alouds and activities for kids. Authors and illustrators led the charge, and celebs are following suit.

Burton, who rose to fame playing Kunta Kinte in the Roots miniseries and Geordi on Star Trek: The Next Generation, is no stranger to the read-aloud. Besides his stint on Reading Rainbow, he offers selections from the likes of Toni Morrison on his podcast, LeVar Burton Reads. Fellow Star Trek actor Sir Patrick Stewart has been reading #ASonnetADay since mid-March, posting daily videos on his Instagram account.

Actresses Jennifer Garner and Amy Adams lead perhaps the biggest organized celeb effort, an Instagram video series called Save With Stories. Garner and Adams teamed with No Kid Hungry and Save the Children to help raise money for hungry kids as part of the series. The caption on every video asks watchers to donate a suggested

Kudos to them for reaching beyond the obvious (Jimmy Fallon reading his own picture book This is Baby) to come up with some pretty sweet matchups.

Want to see Jeff Goldblum read Horton Hears a Who? “Hello. If I may, I’m going to read you a story,” Goldblum purrs, before showing off his weathered childhood copy of the Dr. Seuss classic to the camera.

Here’s Bun B reading Pete the Cat: I Love My White Shoes and Eva Longoria hanging out on her bedroom floor reading La Vida de Selena. How about a suitably enrobed Jeff Bridges reading Caldecott honoree All the World? Or Chris Evans–clad in plaid, not Knives Out knit–reading If You Give a Dog a Donut? Even Glenn Close gets in on the action, bringing a surprising gravitas to Millions of Cats and also explaining that the portrait on the wall is her grandmother.

So far, though, the most sublime pairing of celebrity and text happened on Jimmy Kimmel March 31. Samuel L. Jackson delivered a very Samuel L. Jackson read-aloud of Adam Mansbach’s new PSA riff on his best-selling “children’s” book, Go The F*ck to Sleep. (The reading was also a fund-raiser, for Feeding America.)

“Now technically, I’m not a doctor/

“But motherf*ckers listen when I read a poem/

“So here I am, Sam F*ckin Jackson/

“Imploring you, Keep your ass at home.”