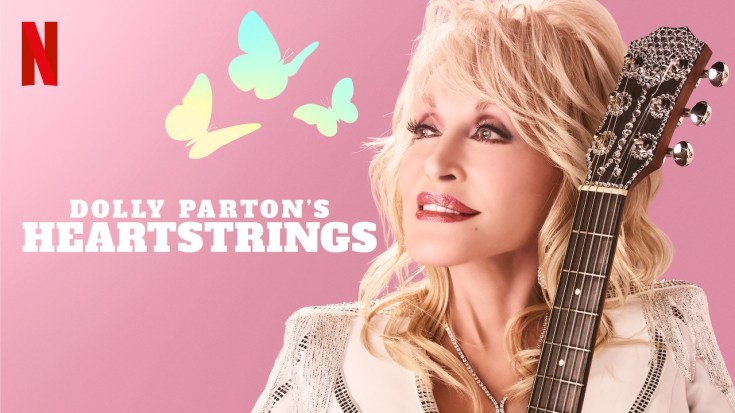 Dolly Parton unabashedly leans in to what works. She never shies away from aww-shucksing her appearance, making herself the butt of a robust boob joke, or choosing to smile on through divisive questions. In today’s rampant cancel culture, she remains beloved across party lines. Her new Netflix series, Dolly Parton’s Heartstrings, exists to cash in on our collective goodwill.

As a young girl, I listened to my mother’s Dolly Parton cassettes, and watched 9 to 5 a psyche-warping number of times. Recently, my tween daughter and I pulled up an Islands in the Stream performance before falling deep down into a YouTube rabbit hole full of Dolly performances. Undoubtedly, the woman is compelling, so a series purporting to tell “the stories, memories, and inspirations behind Parton’s most beloved songs,” should provide of hours of entertainment to her diverse fan base. As her song library also consists of over 3,000 songs, Dolly Parton’s Heartstrings could self-generate in perpetuity and outlast us all. Each episode opens with a howdy-do y’all welcome from Dolly herself as she hangs out on set at Dollywood in full Parton regalia. The corny jokes and forced setup play like a down-home Cryptkeeper welcome before the real show unfolds. The production values lie somewhere around the early 1990s Hallmark Hall of Fame level, and the scripts play less like actual stories related to the songs and more like filmed writing prompt exercises. This show’s universe contains nary a nuance. All characters communicate handy explanations for all their foibles with minimal coercion, usually with a handy drawl that reminds us that these aren’t city folk.

“Two Doors Down” is the anthology’s most daring foray, as it features a closeted gay man, a gender non-binary character, and Melissa Leo’s ample usage of the word “shit.” Throughout the course of the episode, the cast fully Steel Magnolias up their accents. Unpleasant truths emerge, and despite of some initial discomfort, everyone quickly finds common ground via an impromptu Dolly Parton concert. It’s like the most country ABC Afterschool Special ever.

The Law Can Be Tricky, Like Milkin’ A Goat

A little fatherly abandonment and patricide makes up the story behind “If I Had Wings,” where Gerald McRaney and Delta Burke appear to enjoy playing lovers enough to ignore the absurdities of the story. McRaney is Tom, a man who abandoned three children by two different mothers, all because he was a drunk, though that’s mostly because killing his father stressed him out and set him on the run. Now, he’s old and sickly, and apparently can’t run anymore, so his lover invites all those children to meet their Daddy and hear his story. They learn lessons of forgiveness and Christian tolerance , but as it turns out, that one story is all the old man has left in him. He collapses and dies, leaving his adult children fatherless once more. Now they have each other, and their murderous father’s girlfriend, so it’s not all bad.

Other episodes casually ignore social mores and legal consequence with equal abandon. In “Cracker Jack,” a young girl has run away in order to keep her dog. The adults who take her in exhibit no alarm, because they are busy dealing with their adult problems like MS and domestic violence, and they totally understand what it’s like to love a good dog.

Likewise, “Down from Dover” features an interracial couple in Alabama in the late 60s, and there is some gentle racism, but it is easily rectified because the teenagers are in love and everyone can see that. The highlight of the entire series occurs in this episode, when Camryn Manheim shows up as an open-minded midwife trucker who prowls the roads looking for unwed mothers who’ve run away from the halfway house to take them in until their babies are born. It serves as a reminder to us all that Camryn Manheim should be cast in way more shows, preferably with much sharper material.

Supposedly, Dolly Parton directly requested Kathleen Turner for the role of Miss Mary Shaw in “These Old Bones,” and Turner’s delight is hard to miss. She is legitimately grizzled, and seems to be having more fun playing a 1940s woodsy fortune teller than she’s had onscreen since that courtroom scene in Serial Mom. She gets to sing, nod knowingly, and say things like, “The law can be tricky, not like milkin’ a goat.” Ginnifer Goodwin, as an entirely non-controversial female attorney (in the south in 1944!) gamely chomps through the scenery at Turner’s side.

While watching Dolly Parton’s Heartstrings, I grew impatient, as the episodes are long, and the simple characters bored me. At the same time, though, it struck me how many of these episodes handily passed the Bechdel Test, as none of the female characters exist to prop up men, but to prop up a legendary woman’s songs, even if in the loosest sense imaginable. Netflix advertises that these episodes can be watched in any order, which indicates they know some content might not suit all viewers, but hope folks will watch anyway. It just might work, because Dolly Parton’s Heartstrings aims to please, which is something its creator certainly knows how to do.