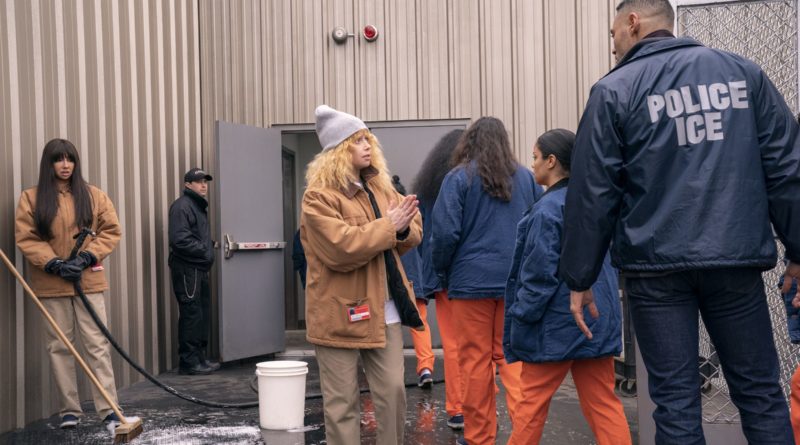 A Fitting Farewell Season for the Revolutionary, Unruly ‘Orange Is The New Black’

The final season of Orange is the New Black continues to have many of the issues that every season has had: an overwhelming number of characters to follow, a weird mix of caricature vs. three-dimensional character, and a main character (Piper) who viewers find annoying and uninteresting.

The show also does a lot of things right, and has as satisfying a finale as possible for a series that can’t possibly feature a happy ending for everyone.

But Orange Is The New Black didn’t always do things right. The gratuitous lesbian sex scenes in season one were a cheap ploy meant to draw a male audience. Thankfully, as the seasons progressed, the show figured out how to keep the sex and lose most of the gratuitousness. But in 2016, the show came under fire for not having any black femme writers in their writers room. Considering the content and the character makeup, this omission feels inexcusable, and it’s an error in judgment that they never really addressed. The writing staff did become more diverse, but they didn’t get black women on board in the way that they should have.

I appreciated that the finale included glimpses of characters who’ve disappeared from the show, but it very much called attention to the fact that we had to follow an unruly number of story arcs. On one hand, the series provided a slew of great roles for many unknown actors, and I’m sure those roles created other opportunities for many of the mostly femme cast. But from a storytelling perspective, the overload of story arcs did the characters and the audience a disservice. Most people I know gave up on the show well before the final season. Audiences will forgive wacky plot lines and swerves in logic if they’re really attached to the characters, but if their favorite characters don’t show up in every episode, they’re probably not going to stick around. One reason viewers might consider diving back in is that Orange Is The New Black has upped the ante on political and social commentary in later seasons. They’ve taken on drug abuse, police/C.O. brutality, Black Lives Matter, transgender advocacy, and the corporate-prison-industrial complex. One could argue that the show taking on ICE and immigration detention was not only inevitable, but that the show’s writers had a moral obligation to do so. I’m glad they did. The season’s ICE raid victims were mostly new characters, with Maritza and Blanca being the exceptions.

While I’ve never loved the show’s use of flashbacks, I think they were essential in showing the people who ICE was detaining. If detainees are going to win the compassion of more Americans (and I have to believe a certain degree of conservative Americans watch Orange Is The New Black), we need to see their situations in context. I wish that the writers had focused the most difficult journey of the four immigrant characters on an original cast member that we’d grown very attached to, like the equivalent of Poussey. Instead ,the characters that the system treated most brutally were newer characters that they audience didn’t have as much time to bond with, along with Maritza, who the show never took very seriously.

Still, the season does a good job of showing viewers how unfairly and inhumanely ICE treats people in its detention centers. Even the regular prisoners, some of whom work in the kitchen in the ICE detention center, are shocked by the lack of rights the detainees have. While I was intellectually aware of this fact, the impact of maximum-security inmates pitying detainees affected me more than a little.

The heart of the show has always been Nicky, Taystee, Gloria, and, to a lesser degree, Piper. The final season prominently features these characters, as well as Cindy, Blanca, Red, Tiffany “Pensatucky” Doggett, Maria, and Joe Caputo. Suzanne was more of a sidenote and a foil this season, but perhaps the writers wanted to give others a chance to win their Emmys.

Other socially-relevant themes in Season 7 include a disgruntled former CO #Metoo-ing former warden Joe Caputo. It’s been interesting to watch the Caputo character grow from bumbling masturbator and ineffectual warden to a more self-aware human who advocates for prisoners. The #MeToo storyline allowed the idea of growth and redemption for offenders while not letting Caputo off the hook for what he did. The contrast between Caputo and the inmates is clear: Caputo was guilty. His public shaming and loss of a job is a small price to pay compared with the humiliation of the women who the system pays lip service to rehabilitating.

This final season of Orange Is The New Black also brings in the concept of prison alternatives by having Caputo teach the inmates a class in restorative justice. This focuses on repairing the harm caused by criminal activity by having the victims and perpetrators meet (if possible), allowing the perpetrator to repair the harm by making amends, and ultimately reintegrating the criminal into the community. It’s been shown to be more healing for both parties, and leads to less recidivism than traditional punitive measures.

The Burden Of Parole

Season 7 also shows the financial burden on prisoners after release, which often leads to homelessness or a return to crime. Parole fees can make it impossible for women to make enough money on which to live. As we watch both Piper and Cindy post-prison, we realize that Piper’s privilege will always keep her protected, and that the disadvantages of Cindy’s circumstances will always work against her.

In the final moments of the last episode, Taystee announces the launch of the Poussey Washington Fund, meant to provide micro-loans to women getting out of prison. As the series fades to black, a graphic for the real Poussey Washington Fund fills the screen. The creators have launched a fund that feeds into several already existing organizations that advocate for criminal justice reform, immigrant rights, ending mass incarceration, and supporting women who are affected by the prison industrial complex.

While I’m not sure that Orange Is The New Black ever quite lived up to its potential artistically, it has created a fund that could have a real and lasting effect on actual people’s lives, and that’s more than television usually does.