The Inside Story of Intrigue, Egomania, and Business Blunders 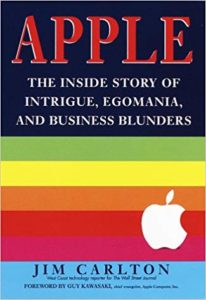 In this disappointing book about a lovable company, Jim Carlton, a West Coast technology reporter for the Wall Street Journal, provides an in-depth look at Apple’s woes through the years.

There are no easy answers to its failures, though it’s tempting to blame former CEOs like Michael Spindler, the German- born leader so rattled by his job that he literally left on life support; Gil Amelio, a techie who didn’t understand how to market a brand name; and even Steve Jobs, the larger-than-life presence ousted by John Sculley, who was later ousted himself.

Apple’s real downfall may have been how loyal its users became–Sculley, who had been a fantastic marketer at Pepsi, refused to license Macintosh applications and even the Mac “box,” a decision that pared down Apple’s users to a tiny band of fanatics. Companies were attracted to the elegant Macintosh but were dissuaded when they couldn’t buy inexpensive knock-offs, as they could with so many other brands, and the inefficient Microsoft system became the industry standard.

Time and again, Apple misjudged the demands of the market, When the company introduced the PowerBook, it overstocked the cheap model and understocked the top-of-the-line models, ignoring the obvious fact that computer fans are willing to spend money in order to get the latest tech toy. Thousands of orders for the expensive PowerBook went unfilled, and Apple suffered a blow to its ego and its bottom line.

But while its problems are fairly evident, Carlton fails to get at the heart of Apple, to what inspired such devotion from users and employees. And like so many products in the high-tech industry, this book is already somewhat obsolete, with the recent resignation of Mike Markkula and the return of Steve Jobs. Apple fans are a die-hard bunch, and this dry corporate history simply lacks the passion that Mac users feel about their product.