What’s with all the superhero family drama?

What’s with all the superhero families? Maybe I’m an old-fashioned comics fan, but when I watch superhero content, I want to see people throwing buses into skyscrapers and punching aliens in the face. What I don’t want is endless saga dialogue about the burden of being in a super-family and how hard it is to inherit power. And yet that’s what we get now: turgid conversation, This is Us with super-capes. Once upon a time, superhero families were for kids, and I mean little kids. When I was young and my heart was an open book, the “Superman Family” was a cheap knockoff comic featuring off-brand adventures of Superboy, Supergirl, Jimmy Olsen, and Krypto the Superdog. Super families were extended costume groups, not actual families, so we could enjoy six pages of weird bullshit characters like Bat-Mite and Wonder Tot.

Family has always been a theme in comics. Batman became Batman because a criminal killed his parents. He adopted Robin as a surrogate son. Superman is an interstellar orphan who farmers that didn’t meet on Farmers Only adopted. Spider-Man mourns his Uncle Ben, and so on. But comics were never about the burdens and challenges of being part of a super family. And now that’s all we get. There’s always a Super-Dad and a Super-Kid. Superhero content now is a narrative kill-the-father scenario that comics writers can’t seem to escape. How did we get here?

An astute comics reader friend points out that the first instance of a Boy Born With Amazing Powers happened in the Fantastic Four, with the appearance of Franklin Richards, “the world’s most powerful mutant,” spawned from the union of Mr. Fantastic and the Invisible Woman. Fine, fine, but that happened in 1968, and the baby didn’t even get a name until 1970. It’s more than 50 years later and his powers are just beginning to manifest. It’s a storyline for an ancient franchise that needs to constantly reinvent itself, but it’s not the entire reason for the franchise’s being. 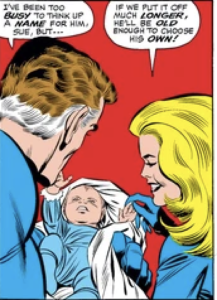 The “My Dad’s A Superhero” cliché started in earnest with The Incredibles in 2004, and with the amusing YA movie Sky High a year later. These films deftly and lightly parodied the melodramatic extended universes of Marvel and DC, creating their own cosmologies. They reimagined the comics world as revolving around slightly dysfunctional, but mostly loving, sitcom superhero families. That little twist would have been enough. But then superhero families started taking themselves way seriously.

The Adventures of Amazing Boy

The “kid inheriting powers” trope reached its irredeemable point with Bryan Singer’s terrible, humorless Superman Returns in 2006. This ridiculous scene, where Superman’s son “Jason” throws a piano to keep a guy with a clown tattoo on his skull from bludgeoning Kate Bosworth, should have been the death knell.

Instead, creators of comic-book entertainments decided that superhero families were the way forward. We’re now awash in superhero content, and they all tell the same lame story. WandaVision featured some incredible sitcom homages, great songs, and fun action set pieces, but at its core, it was a story about a super-mom trying to protect (and resurrect) her super-kids. The Flash, a CW show for 12 year olds, for a while featured The Flash’s daughter, who was also flashy, freshly emerged from a time portal or some such thing.

All the super-universes are getting into the act. Season One of The Boys was a wacky, gory satire of the Justice League. But Season Two, beyond its ludicrous white-supremacy storyline, moved heavily into super-father/super-son territory, as Homelander tried to teach his annoying kid about his annoying powers, leading to a hard-R recreation of the above scene from Superman Returns, where the super-kid barbecues the season’s main villain. The kid was lame. Super kids are always lame. I wanted to see him lose. But super kids never lose.

This brings us to our current moment’s glut of super families. The last few months have brought us two extended super-universes, both of which are absolutely obsessed with the concept of super family life. The first, and far and away the better one, is Invincible, an intermittently spectacular animated show based on the Image Comics series by Robert Kirkman.

In Invincible, a teenage kid named Mark Grayson goes through super-puberty and develops incredible powers. This is because his dad, Nolan, is actually “Omni Man,” a mega-alien from the planet “Viltrum,”  home to the most powerful beings in the universe. How relatable. Here is a scene where father and son play super-catch in the skies above their town, the ultimate manifestation of super family life.

Invincible is an entertaining show, with a lot of crazy subplots, funny supporting characters, people punching aliens hard, and a ridiculous voice cast. Oscar nominee Stephen Yeun voices Mark Grayson/Invincible, and J.K. Simmons plays Omni Man, almost to the point of distraction. I never forgot it was J.K. Simmons,  and found myself humming the Farmer’s Insurance theme. Mahershala Ali, of all people, gets into an episode or two as a urban vigilante who is also a crime boss than can turn himself into stone. The three main female characters get voices from Sandra Oh, Zasie Beets, and Gillian Jacobs.

Seth Rogen and Walton Goggins lurk around the voice edges, too. At one point, there’s a gay romance subplot between characters played by Jonathan Groff, who voiced George III in the original cast of Hamilton, and Andrew Rannels, who played the lead in the original cast of The Book of Mormon. And they don’t even sing. Clancy Brown, who voiced Lex Luthor in the original Justice League cartoons, leaves them all in the dirt with his incredible voice work as some weird villains called The Mauler Twins.

But the show never lets you forget its main purpose: To talk about the burden of super families. In order to hammer this home, it features multiple scenes of Omni Man, who is not the hero he seems, beating the living crap out of his son in order to teach him a super-lesson. There will be a Season 2 of Invincible, and we can only hope for less of these daddy issues and more of the burgeoning romance between Robot and Monster Girl.

On the other end of the superhero families burden spectrum, we have the hilariously bad Jupiter’s Legacy, Netflix’s expensive “Millarworld” super-saga, mercifully canceled after one miserable, pretentious season. In this universe’s mythology, Sheldon Sampson, a Depression-Era industrialist played by aging hunk Josh Duhamel in a hilariously unintentional hammy performance, whines and moans his way to a mysterious island, where he and his family and friends encounter aliens who transform them into superheroes. All of that stuff is fine in its own dorky way, but Jupiter’s Legacy grafts that origin story onto a contemporary saga where Sheldon, now a semi-immortal Superman type called The Utopian, tries to teach his children what it means to be a hero. His wife, once a spunky Lois Lane-like reporter at a tabloid, is now called Lady Liberty or some such thing.

These children, I should add, are called Brandon and Chloe, because their parents named their children based off teen dramas from the 1990s. Brandon has big super powers and wants to be super like his dad. Chloe is a supermodel who looks like an off-brand Liza Minnelli. She’s totally tormented by her super family and just wants to fuck random dudes and do random drugs. Every subsidiary character, some of whom Jupiter’s Legacy even forgets to name, has his or her own super kids who are also dealing with super burdens. The show, at its core, is all about the burden of being super families. And it’s super-boring. Thank Jupiter that Netflix put it out of its misery.

We can hope that the mercy killing of Jupiter’s Legacy is the beginning of the end of the over-serious super families. Enough with these super people and their problems. Just throw a bus through a skyscraper already. At the very least, we can hope that super families go back to being about kids, and for kids. That would be super. One thought on “This is Super Us”