I started reading MAD on a regular basis starting around the 2nd grade back in 1981. Especially the parodies of the great Mort Drucker, who died on April 8th in his Woodbury, NY home at age 91.

I remember how dense it was to get through–it would take me literally the entire month to read. And I had like this rhythm to reading it. I’d always, always start at Spy Vs. Spy, then the Don Martin page before checking out what kind of super fresh 70s clothing that the folks on Dave Berg’s The Lighter Side were rocking. My curiosity about the foldable folly on the back cover would usually get the best of me as well, rendering every issue I ever owned worthless on the collector’s market.

But I saved the best part for last. The movie spoofs. One of the very first issues I picked up with my allowance money was the January ’81 edition, which featured Alfred E. Newman’s iconic face drawn on the body of Yoda. I got it strictly for “The Empire Strikes Out,” the very parody that would spark the ire of Star Wars creator George Lucas, or rather his team of lawyers.

What piqued my particular interest in this parody, however was not just my undying love of all things Star Wars. Albeit unwittingly because I was eight, it was the first time I got to read a Mort Drucker film parody penned by writer Dick DeBartolo. The first time Drucker and DeBartolo worked together was Issue 98 from October 196 on “Flapper”, a super funny piss-take on the beloved porpoise sitcom Flipper. And from that issue until their last collaboration in 2009, the duo spoofed hundreds of shows and movies across five decades. Oftentimes their targets were the summer blockbusters of that year, be it The Flying Ace or The Towering Inferno or Alien or Robocop or even Teenage Mutant Ninja Turtles.

The team of Mort Drucker and Dick DeBartolo were so good at what they did that George Lucas himself wound up writing a letter to MAD Magazine. Only this time it wasnt to “cease and desist” but rather hail the duo as “the Leonardo da Vinci and George Bernard Shaw of comic satire.”

Here are five Drucker/DeBartolo productions that, as a lifelong reader of MAD, I believe serve as ample justification for such a bold declaration. Even a cinematic mind as brilliant as Stanley Kubrick has been called an idiot. But in the case of the iconic director of The Killing and Full Metal Jacket, it was the team of Drucker and DeBartolo who first did the honors in this purposefully prolonged and drawn-out pisstake on the Oscar winning space epic. And, as it turns out, that giant monolith turns out to be a book entitled How To Make An Incomprehensible Sci-Fi Movie and Several Million Dollars. Milos Forman’s asylum life masterpiece was turnkey ready for a satirical spin the moment it hit box offices nationwide. But the way by which Drucker and DeBartolo not only lampooned Cuckoo but cranked up the film’s manic energy to 11 gave the story a whole new dimension. It was features like this that made these guys the dream team of MADison Avenue.

None of the flicks parodied in this issue dated October 1982 are not exactly household favorites (though I’m sure there are cult audiences for each of them). The only reason I remember On Golden Pond was on account of all the old folks taking up room on line at the LOEWS box office while I was going to see Clash of the Titans for the 10th time, and Death Wish II because Jimmy Page did the soundtrack. As for Deathtrap, I owe it to myself as a lifelong Michael Caine fan to give it a revisit. However, what makes this particular edition so special is that it’s the only issue of MAD to feature three Drucker/DeBartolo spoofs between its pages, making this a highly sought-after collector’s item for MAD folk.

As a sixth grader in 1985, Back To The Future hit my demo like an atom bomb. And indeed Issue no. 260 was high on my list when I picked it up at my local Waldenbooks. Having seen the Robert Zemeckis-directed sci-fi comedy classic at least twice before I copped this edition of MAD, I felt especially prepared for anything DeBartolo and Drucker was gonna throw our way. But leave it to them to pretty much whittle the entire premise of the movie down to the bizarre love triangle between “Marquee” McFly and his parents. Not to mention a few jabs at producer Steven Spielberg for good measure. 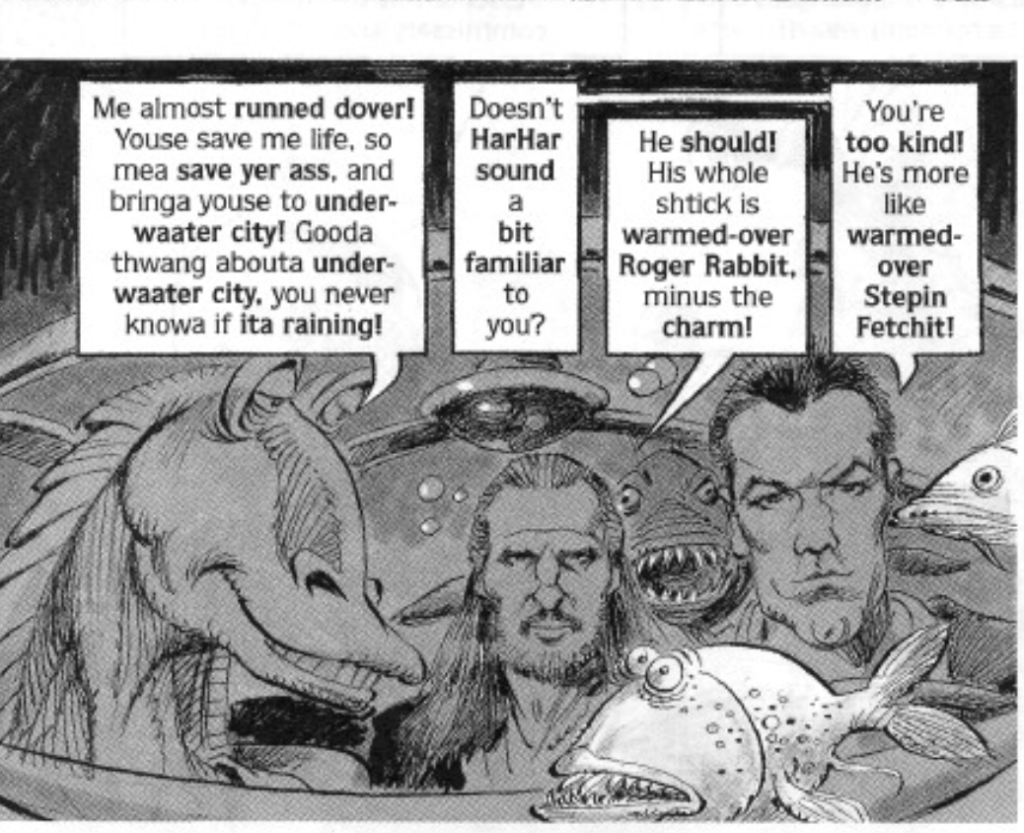 Drucker and DeBartolo worked together only a handful more times before turning in their last feature in 2009 (a sendup of the Chronicles of Narnia). However,  clearly their best work during this time was the pair’s return to doing what they did best–beating up George Lucas. And their parody of The Phantom Menace spoke to so many of us who grew up on these fellas poking fun at the “Star Bores” saga our whole lives. Only there was a shared sense of cynicism between reader and creators because most of us felt gypped by this movie, as a wash of Gungan jibjab piss away any new hopes of a classic Star Wars chapter.

Rest in Peace, Mort Drucker. Thank you for your part in my idiocy. I mean literacy.

One thought on “The Five Best Drucker-DeBartolo Mad Magazine Parodies”