‘Illuminations’ by Alan Moore, a warning about our comics-obsessed culture

Alan Moore is the best comic book writer of all time, and if that seems like damning with faint praise, then his new collection Illuminations proves his skill with stories that don’t even have pictures in them. His pieces range from a truly disturbing work of fantasy to a light-hearted riff on the paranormal to extended jokes in Shakespearean and cosmic settings.

Most writers would be thrilled to pull off any one of these stories. Moore spans galaxies and crashes genres. He imbues physics with personality, modernizes the Apocalypse, and, yes, returns to the world of comics for one more wrestling match.

While mostly unknown to people outside the geek world, Moore tilted the whole axis of popular culture back in the 80s. Moore’s Watchmen — named one of the best novels of the 20th Century by Time magazine, back when that meant something — deconstructed superhero cliches by putting the characters into a more realistic world, only to show how they’d deform it by their very existence.

Watchmen, along with Frank Miller’s dystopian Batman series The Dark Knight Returns, turned comic books into serious business. Grown-ups could read them without too much ridicule. There’s a direct line from those books to today’s multi-billion dollar superhero-industrial complex. 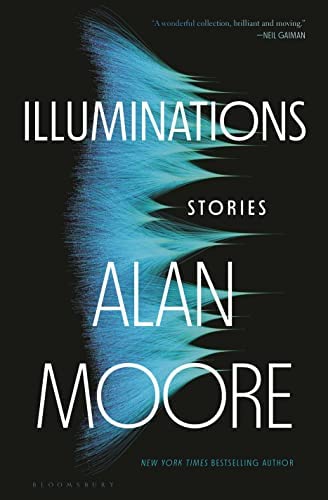 Very few of those dollars went to Moore, who is now famously ambivalent about comics and his place in them. He will no longer work with either DC or Marvel due to ongoing disputes over how the big two publishers treat creators. He’s publicly and financially disowned any adaptations of his work, turning down big paychecks from movie and TV studios for them. He recently told GQ how he asked Damon Lindelof, who made the critically acclaimed HBO sequel to Watchmen, to quit bothering him.

Moore also publicly worries about a culture stuck on power fantasies originally aimed at 12-year-old boys, and probably with good reason. He keeps telling us he’s done with superheroes, and he wishes we would all grow up as well.

After the last installment of League, Moore said he’s moved onto other works. He’d already written a fictionalized history of Northampton, his home city, and a massive, 1,200 page novel, Jerusalem, also set in Northampton.

Despite the praise for those books, the world has never quite given him respect he deserves as a prose stylist, probably because he is so very good at writing comics, and so tied to properties like Watchmen.

But Illuminations should remedy that, or at least it ought to. It bursts with so much purely entertaining ideas, so many well-crafted sentences, so much actual fun, that it’s hard not to imagine Moore typing away, cackling like a mad wizard.

Moore’s biggest weakness is sometimes he simply does not know when to stop. He overstuffs his prose with imagery and allusion, creating blocks of text as dense as a neutron star. Reading some of his page-long paragraphs to the end is like being concussed with a very large diamond.

“The Improbably Complex High-Energy State,” for instance, is an extended joke that probably would have delighted the late Douglas Adams but takes way too long to reach the punchline. Likewise, “American Light” creates the life of a fictional beat poet through an exegesis of his masterwork. It’s an impressive work of imagination and engineering, but it’s also exactly like reading an obscure work of literary criticism about an even more obscure writer.

But the pieces that work reveal perfect glimpses into other universes. My two favorite stories in the book are “Hypothetical Lizard” and “Not Even Legend.” These are fortune cookies wrapped around a hit of acid. Even describing their plots spoils them a little, and they are truly wonderful. People should read them without hints.

“Location, Location, Location” shows Moore’s sense of humor as he turns the Apocalypse into a very British comedy. “Cold Reading”  and “And, At the Last, Just to be Done With Silence,”  both showcase Moore’s ability with voice and tone, with endings worthy of Edgar Allen Poe or “The Twilight Zone.”

But “What We Can Know About Thunderman” is the main attraction in Illuminations, a novella-length history of comics told through the mostly crappy lives of some mostly crappy people.

For a business based on selling heroism, there’s been a lot of outright shitty behavior in the world of comics. Joe Siegel and Jerry Shuster gave Superman away for almost nothing, and nearly died in poverty and obscurity. Jack Kirby did as much work (or more) than Stan Lee in creating the Marvel Universe, but he had his art stolen and never received anywhere near the money or credit. There are some great people in comics—I’ve met them—but they all know someone who got screwed, or did the screwing.

Leah Moore, Moore’s daughter and a writer herself, once tweeted that her dad doesn’t hate comics. The industry has just broken his heart too many times.

And “Thunderman” cuts deep, the kind of butchery that only someone who knows where the soft spots are can deliver. There’s already a thread on Reddit dedicated to figuring out which industry figures match Moore’s characters in “Thunderman.” Stan Lee is easy. Moore calls him “Satanic Sam,” and he’s a far cry from the warm, fuzzy image in all those Marvel movie cameos. And Moore also comes up with a variety of inventive ways to kill or humiliate other comics professionals.

It reminded me, at times, of Thomas Pynchon or David Foster Wallace, and I suspect anyone who didn’t know the people behind the scenes would read it like one of their novels — a phantasmagoric satire of the real world. Like the book’s title piece, “Thunderman” warns the reader about the dangers of drowning in nostalgia.

Still, there is real affection for those lost worlds, too.  Like Freud and C.S. Lewis and Walt Disney, Moore knows the terrible power of childhood love. He describes one character’s first encounters with a comic-book rack as a kid with a kind of soft-focus glow of beauty: “A holy wonder… the cliff-face of an impossible new continent… cheap heaven, just down the street.”

Even though the character grows up to be a truly odious person, there is something touching and doomed about his escape into fantasy, away from his parents’ divorce. Maybe we know something primal and true when we’re kids, and we spend the rest of our lives a little bit sad after we lose it.

And I suspect Moore does too. He never says that the vibrant, simpler worlds in comics don’t exist.

He only warns us that we shouldn’t try to live there.