Brooding performances. Crepuscular light. Decrepit cityscapes. Ominous sound design. And a gaunt frame that exudes coiled rage. “I used to think that my life was a tragedy,” says the hollowed-out figure. “But now I realize that it’s a fucking comedy.” Todd Phillips’ Joker is not joking around.

To paraphrase another movie: Why so self-serious? At some point between Caesar Romero’s cackling ’60s goofball and Jack Nicholson’s heavy-lidded ’80s menace, pop culture decided that Batman’s nemesis was a villain of Shakespearean proportions. Alan Moore’s acclaimed 1988 graphic novel The Killing Joke probably had something to do with it. “An exceptional piece of literature,” raves a fanboy review on Amazon’s website. There you go: apparently the Joker is legit lit.

The white-faced, green-haired criminal with the creepy cackle dates back to 1940, appearing in the same comic book where the caped crusader made his debut. But this time around, he’s a troubled soul named Arthur Fleck (Joaquin Phoenix), a virginal bachelor who lives with his infirm mother Penny (Frances Conroy) in what looks to be Gotham City circa 1981. A sanitation strike has turned Gotham into a stinking pile of garbage, where scores of super rats plague the streets and porn movies fill the multiplexes. Fleck suffers from a medical condition that causes Tourette’s-level spasms of guffaws. “Forgive my laughter” reads a card he carries around. “I have a condition.” Ironically, Fleck is an aspiring stand-up comic. “Don’t you have to be funny to be a comedian?” says his well-intentioned mother. Ouch.

During the day, he ekes out a living as a rent-a-clown. But after a bunch of punks beat the crap out of him, a colleague loans him a handgun. That’s not so good when it accidentally falls out during a routine at the local kid’s hospital. But it sure comes in handy when a bunch of drunk Wall Streeters pick a fight on the subway. Bernie Goetz would approve.

After that spasm of violence, Fleck starts to feel more empowered. And in between bouts of bathroom tai chi and a soft-shoe routine on a long stairwell, Fleck’s alter ego begins to emerge. The film indicates this with a series of slo-mo reveries, plus a budding connection that seems delusional until it actually reveals itself to be a delusion. Gotcha. Darkness visible.

It wasn’t always this way. Christopher Nolan cast Heath Ledger as the Joker in 2008’s The Dark Knight, and between them they hatched a delightfully wicked portrayal that reveled in anarchy. Ledger defied psychological profiles by confessing to ever-changing origin stories. He chronically flicked his tongue out like a frog, simultaneously invoking and mocking the idea of menace. He even dressed in drag and did some prop work with a detonator. It was chilling and ridiculous. But never deep. And he got a posthumous Oscar for it.

In the decade since, superheroes have become the default blockbuster of our time, costing hundreds of millions and earning back billions. With numbers like those, comic-book IP’s need to be safe, which is why Disney’s Marvel movies are rigorously calibrated to be preteen-edgy but never dirty. 20th Century Fox pioneered the R-rated superhero, with Deadpool, and then reached for maturity with Logan. Warner Bros knows they can’t make a splash unless they somehow pivot. So their movie versions of DC comics, overseen by 300 auteur Zack Snyder, are overtly gloomy. Snyder’s influence has waned somewhat, leading to the notable bubblegum exceptions of Shazam! and Aquaman. But DC movies are still darker than Marvel’s. And now, they’ve taken the next logical step and embraced the R rating, too.

Which leads us back to Joker. Phillips pitched Warner Bros on an ingenious idea: give interesting directors a crack at their fabled stable of superheroes, keep the budgets relatively low, and let them play around with it. He proposed that they release the films under an alternate label called DC Black. His version of the Joker was a prime example, a throwback to the Scorsesean worlds of Taxi Driver and The King of Comedy where Robert De Niro embodied masculine alienation. In fact, he got Martin Scorsese’s producer Emma Tillinger Koskoff interested. And De Niro even agreed to join the cast, as Murray Franklin, the host of a talk show—the exact position De Niro’s King of Comedy antihero Rupert Pupkin so desperately wanted.

To its credit, Joker is definitely a kindred spirit to Taxi Driver. Scorsese’s twisted neo-noir anti-romance so freaked out Columbia Pictures that, in 1976, the studio quietly released it on a handful of screens the weekend before Valentine’s Day. No matter: People lined up around the block as soon as it opened. Critics raved, the movie went on to win the Palme d’Or at the Cannes Film Festival, and eventually it even nabbed four Academy Award nominations including Best Picture.

You Talkin’ to Joker?

Warner Bros is hoping for an equivalent reception. It may get its wish. Last month, the Venice Film Festival gave Joker its top prize, the Golden Lion. The film is already certified fresh on Rotten Tomatoes, and the Oscar oracles predict good fortune. Unlike Taxi Driver, though, Joker will open wide on 4,300 screens. The supervillain origin story could bring in as much as $95 million on its opening weekend. People aren’t discovering Joker; it’s being thrust upon them. Most viewers won’t know what hit them.

Like Taxi Driver, Joker has a dark power that just doesn’t jibe with Hollywood movies, and that is more than a little exhilarating. It’s also unsettling, mainly because the film feels like it’s in over its head. Taxi Driver is a brilliantly cathartic exploration of one person’s existential crisis. Joker is pure nihilism, presented with a mischievous shrug. The characters don’t really feel that human, so the film lacks in human insight. There’s no there there.

Phoenix’s skeletal lookit-me! weight loss, sucked-in gut and rib-cage protrudent, is, at best, a shallow character trait for someone who spends way too much time shirtless. At worst, it’s a gimmicky actor quirk and a stand-in for the hard work of storytelling. Maybe it’s a reaction to the superficial script, which offers up Psychology 101 answers to Arthur Fleck’s laughaholic trauma.

Fleck never knew his father. He was abused as a child. His mother was in a mental ward. He didn’t take his meds and didn’t get enough hugs. Boo-hoo? Ho-hum. It’s a get-out-of-jail card for all the rest of us. Scorsese never gave Travis Bickle a clinical pathology, and the character resonates that much more because we recognize his aching loneliness not as a medical condition but as a human response to a world riddled with vice. Deep down, we could all be Travis Bickle. Arthur Fleck, though, is stubbornly freakish. Defiantly alien. He’s a head case. We can comfort ourselves knowing that at least we’re not him.

Still, Joker has two scenes that are absolutely brilliant. In one, a kabuki-faced Fleck has two old friends over to his apartment for some cold vengeance. In the other, Fleck realizes a lifelong dream of appearing on Franklin’s show. Both are directed, and acted, with a chilling intensity that’s hard to shake. What better way to paint that smile on your face than with a bright red gush of blood? 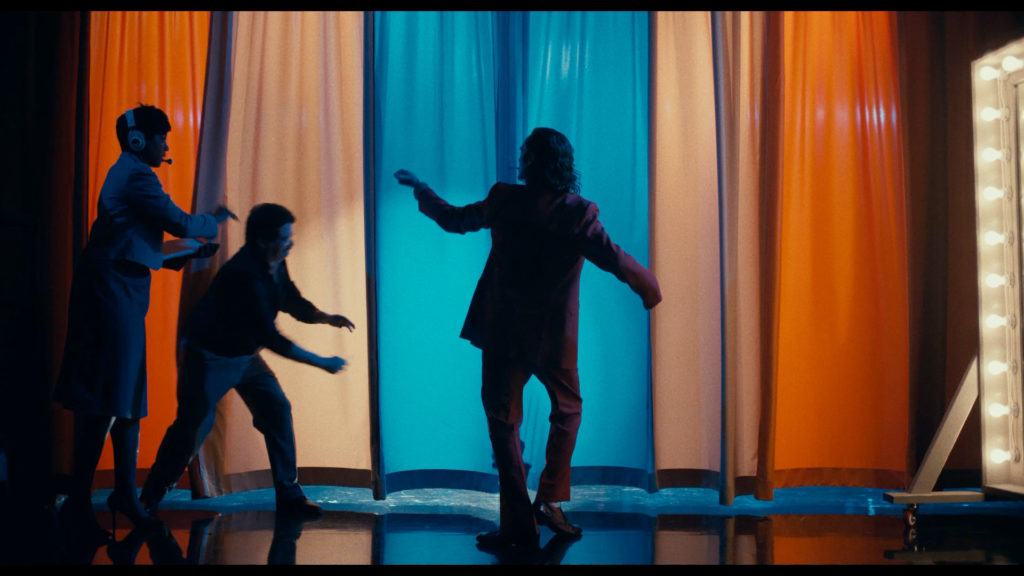 One thought on “No Joke”