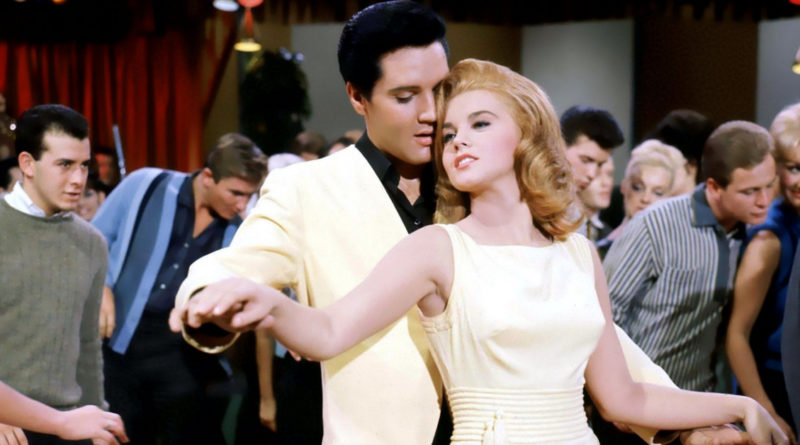 Happy 85th Birthday to The King

Elvis Presley, who would’ve turned 85 this month, loved movies. And he dreamed of being a film star. Unfortunately, film stardom didn’t turn out quite how he expected. He liked action films and off-the-wall fare—James Bond and Dr. Strangelove were favorites— but got stuck making a string of increasingly lackluster musical/romantic comedy mash-ups instead. Too many of his 31 feature films ended up being forgettable, with weak storylines and weaker songs. But Presley’s film career isn’t a total wasteland. You just have to know where to look. Here’s an overview of the King’s most notable moments on the silver screen:

This was Presley’s own favorite of his movies. His character, Danny Fisher, is a troubled young man in the Rebel Without a Cause mode, trying to find his way through a gritty, seedy world of nightclubs, brothels, and criminals in New Orleans. There’s a first rate cast: Walter Matthau as a predatory gangster; Carolyn Jones as Matthau’s wry, world-weary girlfriend; Dolores Hart as the virginal innocent. Snappy dialogue and terrific numbers like “Trouble,” a bluesy “New Orleans,” and the atmospheric “Crawfish,” sung with a street vendor in the opening sequence, make this a winner.

The title song provides the soundtrack for what’s hands down the best dance number in any of Presley’s movies; prior to filming it, Presley even got a few dance tips from future West Side Story star Russ Tamblyn. Presley’s Vince Everett is an ex-con who becomes a singing star and is nearly brought down by his own arrogance; never again would he play a character so ruthless. Other musical highlights include the bright pop of “(You’re So Square) Baby I Don’t Care” and “Treat Me Nice.”

Presley’s first color film is essentially his own origin story. He plays Deke Rivers, a truck driver who just happens to sing, who’s picked up by a country & western band to add some youth appeal to the act. The city authorities fear the corrupting influence of this new-fangled rock ‘n’ roll jive, but by the film’s end everyone’s learned it’s just good clean fun. The satin western outfit Presley wears while singing “(Let Me Be Your) Teddy Bear” became iconic. Look for his beloved mother Gladys sitting in the audience as he performs “Got a Lot o’ Livin’ to Do.”

Presley is finally paired off with someone who matches him in sex appeal: Ann-Margret. Forget the slight plot, which has Presley as race car driver Lucky Johnson, who loses his gambling winnings and is forced to work as a waiter to pay off his hotel bill. Presley and his co-star sizzle in each scene they have together, especially the dance numbers, displaying the intensity that led to an off-screen affair between them as well. The two playfully spar in “The Lady Loves Me,” “I Need Someone to Lean On” is one of Presley’s most sensitive performances, and the vibrant title track is the cherry on top.

The first, and best, of Presley’s “travelogue” films that dropped him into an exotic locale, surrounded by a bevy of attractive young women, and a bottomless cache of songs. The storyline is somewhat odd; as Chad Gates, Presley turns down a job in his father’s pineapple business to become — a travel guide. But as one of the few times Presley filmed on location the setting is gorgeous, the soundtrack includes his signature song “Can’t Help Falling in Love” and the lively “Rock-a-Hula,” and Angela Lansbury happily gnaws on the scenery as Presley’s Southern-born mother.

With a script by noted playwright Clifford Odets (based on J.R. Salamanca’s novel The Lost Country), this was Presley’s most literate film. As Glenn Tyler, a rebellious young man whose hot temper shields the sensitive soul inside, Presley is torn between a Good Girl (a virtuous Millie Perkins), a Bad Girl (the sultry Tuesday Weld), and an Older Woman (a well meaning, if vulnerable, Hope Lange). The Peyton Place-esque drama would’ve been heightened had the producers had the courage to scrap the few musical numbers entirely; the incongruously jocular “I Slipped, I Stumbled, I Fell” is especially at odds with the film’s hothouse atmosphere. But they’re not too distracting.