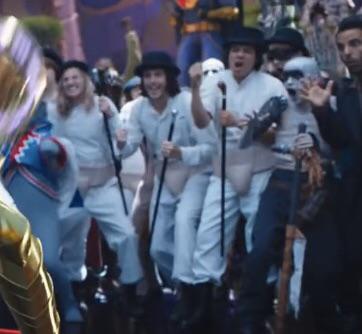 For the most part, the Internet received the Space Jam 2 trailer appropriately: as an advertisement to get people to watch the movie. But dedicated netizens quickly spotted all sorts of cameos from Warner Brothers properties in the individual frames of the trailer, establishing Space Jam 2 as an entrant in the Ready Player One style of hyperactive pop culture referencing. This ranges from obvious choices, like King Kong, the Wizard of Oz, and the various incarnations of DC Comics properties, to the obscure, with likes of Jabberjaw, the Goonies, and Curious George. And then there’s probably the single most inexplicable cameo of the trailer–the Droogs from A Clockwork Orange.

You’ll certainly recognize imagery from Stanley Kubrick’s 1971 classic even if you’ve never seen the movie yourself. The Droogs wear bizarre white jumpsuits, with codpieces that give the vague appearance of a superhero costume, with black bowler hats, canes, and shoes that give off the vibe of golden era Hollywood musicals. The costumes were a bewildering mishmash of classic and futuristic style even when the movie was still new, and only accentuated by the bizarre behavior of the Droogs themselves. A violent, drug-addicted gang, they speak in a fictional dialect that’s simultaneously evocative of Eastern European gangsters and English chimney sweeps. This allows for a sort of bizarre charm even in the film’s vilest scenes which involve graphic depictions of murder and rape alongside cheerful music sung in character.

For the Droogs to warrant a cameo in Space Jam 2 simply as an iconic Warner Brothers property makes sense. But the move takes on a bizarre irony following the much discussed decision from the production that the notorious Looney Tunes skunk Pepe LePew would not be returning even in cameo form because of the presumption that he’s representative of rape culture. Pepe LePew is largely an artifact of a very different time. Nevertheless, even when the character was still relevant, role reversals on Pepe LePew were quite common. Several Looney Tunes shorts actually contrive reasons to have Penelope, the mispainted cat of the French skunk’s overly amorous affections, be the one doing the chasing and the terrorizing in the name of overly aggressive romantic pursuit.

Such a negative interpretation is nowhere near as obvious with the Droogs. Over time, critics and historians have interpreted A Clockwork Orange as a classic, seeing its disturbing X-rated presentation as artistic license. It joined the National Film Registry of the Library of Congress only last year. But when Warner Brothers first released A Clockwork Orange to a wider audience, the response was far more hostile. Multiple countries banned the film amid a persistent source of outrage among social organizations that the movie simply made the behavior of the Droogs look glamorous and cool, with copycat crimes getting to be enough of a public issue that Kubrick himself advocated for the United Kingdom to ban the movie.

The apparent redemption of A Clockwork Orange has nothing to do with the movie’s imagery becoming any less horrifying. The simple fact of the matter is, as a relegated classic, A Clockwork Orange is increasingly less a movie that people have actually seen rather than one they have just heard about. The Droogs themselves aren’t even the most distinctive element. That honor belongs to the oft-repeated and parodied scene wherein the Droog leader is strapped into a chair, drugged, with his eyes kept forcibly open with the distinctive apparatus which also replenishes the moisture of his eyes as he watches depraved images and associates them with intense physical pain. The fact that this scene, and indeed this entire plot point, appears to paint the monstrous lead character in a sympathetic light was of no assistance to A Clockwork Orange in its controversial initial run.

The entire context behind the Droogs and A Clockwork Orange mainly serves to highlight a fairly absurd point about the current reign of moral policing in the entertainment industry. It matters far less what the content actually says compared to its vague image in the zeitgeist. Pepe LePew is a French rapist skunk, so he has to go. Never mind that the original cartoons portray his as buffoonish, a deliberate contrast to his overly romanticized dialog, and that he’s not a character anyone would want to imitate.

Meanwhile, the Droogs are criminals, but they look cool, and they’re a reminder that Warner Brothers produced many culturally relevant films that you can’t just quantify as popcorn entertainment. Never mind the fact that in the event some teenager watched A Clockwork Orange on the basis of this cameo, it’s pretty easy to imagine they might have thought the Droogs had some good ideas. Why not? Remember Joker discourse? The main difference is that the Droogs don’t have an actual material basis for their beliefs, they just rape and kill for fun. But this hardly makes a meaningful difference when it comes to the motivations of violent criminals in real life.

The entire notion of moral discourse in entertainment is absurd. The contrast between Pepe LePew and The Droogs in Space Jam 2 demonstrates that even the people responsible for making these decisions don’t actually believe them, or at least haven’t put all that much thought into them. It is, as usual, all about the money, and arbitrary guesses about whether adding or removing any given rapist to a production will either improve or decrease the bottom line. We should always remember this whenever Hollywood claims to be making a stand for moral reasons.