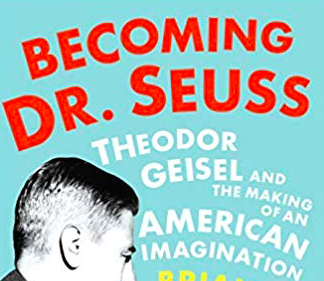 A New Biography of the Shakespeare of Kiddie Lit

You know the name “Dr. Seuss,” it’s an iconic brand of children’s literature. But do you know the man behind the name? Theodor “Ted” Geisel was a much more complicated figure, a man who worked hard in a genre that doesn’t seem all that hard. He struggled with the reputation he accrued, even as he strove to do more than just turn in another variation on “Dick and Jane.” It may not seem like it, but his struggle for legitimacy makes for an entertaining biography that, courtesy of author Brian Jay Jones, lays bare the genius behind the brand. Becoming Dr. Seuss: Theodor Geisel and the Making of An American Imagination details the life of Geisel, who started out life as a second generation German-American and brewer’s son expected to carry on the family business. Prohibition came along, however, and set Geisel on the path to an itinerant education and a few years of work in the advertising racket before arriving at his destiny: penning some of the best-known and best-loved classics of children’s literature.

Jones describes Geisel’s early attempts to forge a career as a cartoonist and humorist while at Dartmouth (in one of the many ironies of his life, the author who helped make learning to read fun was a poor student), and how he got started writing for children. As his life and career went on, Geisel slowly came around to not only accepting his role as America’s premier children’s author, but also embracing the opportunities that it gave him to write how he wanted while also educating his audience. Geisel never saw himself as merely an author for children; one of his maxims to other kiddie-lit authors was that “I write for people.”

Geisel didn’t lead a spotless life, of course; few human beings do. In recent years, critical examinations of some of his work have led to calls for a reevaluation of his status, and Jones doesn’t shy away from the controversies surrounding Geisel’s treatment of race and female representation in his work. Indeed, one of the most obvious contradictions that surround Geisel stems from this: during the First World War, people discriminated against Geisel because of his German heritage, while during the Second World War he publicly drew cartoons calling for the internment of Japanese-American citizens. When his first wife Helen had to have a life-saving operation in the Thirties, it meant that she was unable to have children. Thus the most prominent name in children’s literature produced no children of his own, though he later became a stepfather to his second wife’s two daughters.

But Geisel was also a man who could change his mind and use his art to change the minds of others; throughout his work, he sought not only to entertain but to educate minds both young and old. The Lorax famously became a rallying point for the nascent environmentalist movement of the Seventies, while How the Grinch Stole Christmas questioned the materialism surrounding the holiday. And in his most famous work, The Cat In the Hat, Dr. Seuss drove a nail through the heart of the Dick and Jane-style readers aimed at helping kids learn words without necessarily entertaining them, as he concocted a tale that continues to make kids not only laugh but want to read more. His achievement is all the more impressive considering the constricting word list he used.

Like any giant of artistic merit, Dr. Seuss is not impregnable to the slings and arrows of critical reevaluation. But you can still apply the truths that the work showed to the world. And Geisel himself, a man who was a father figure to so many, was a flawed artist whose prejudices occasionally derailed his message. But he evolved, and his work did so as well. As Jones documents in a well-written and entertaining biography worthy of its subject, Geisel became beloved because he didn’t treat kids like idiots. His books were and are for everyone, no matter their reading level.