High-Flying Adventures in the Stock Market by Molly Baker 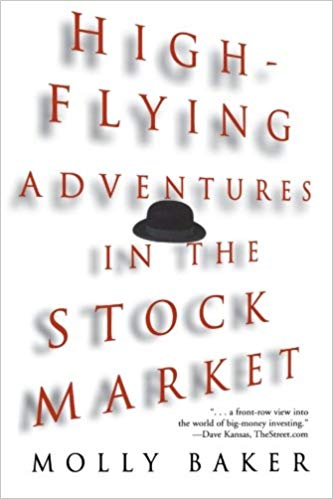 Mutual fund managers are the unsung heroes of the New Economy. They may not have the ruthlessness of a Bill Gates, but without them to spread the wealth around, the stock market would be just another gigantic speculative bubble waiting to burst. The exploits of one such Prometheus are the subject of Molly Baker’s new book, High-Flying Adventures in the Stock Market.

Baker takes us into the office of Jerry Frey, high-flying manager of $2 billion in assets, including the Delaware Aggressive Growth Fund, one of the top-performing funds in the country. She chronicles the travails of Frey and his assistants during the last half of 1998, a time of nerve-wracking volatility in the markets. Should Frey play it safe and conserve cash? Or should he go for broke and shoot for 5-star returns? With Aggressive Growth down 19% in October and his bonus hanging in the balance, Frey must summon the Right Stuff to “make it to the top.”

Along the way, Frey battles many foes: investment bankers peddling dubious IPOs, greedy investors focused on the quarterly bottom line and competing mutual funds eager to steal them away. But his greatest struggle is to “beat the indexes,” those mindless representative samplings-the Dow, the S&P 500, the NASDAQ Composite-that regularly outperform the most intensely managed funds. Like all money-managers, he is haunted by the specter of the efficient market. Frey thus embodies the existential predicament at the heart of modernity, as he embarks on a bleak quest to prove that he is statistically significant.

Baker shows us the “vision” that carries Frey to the top. He reaches back to his high-school football days for lessons about being “fast” and “aggressive.” He builds a portfolio with both “endurance” and “fast-twitch explosive muscle response.”

Baker, a former financial analyst and Wall Street Journal reporter, gives us a fly-on-the-wall view of the mechanics of money-management. Jerry and his colleagues gobble muffins and swill orange juice. They talk to stock analysts on the phone, read prospectuses, call up data on their computer screens, bounce hunches off each other. When they guess a stock will go up, they buy; when they guess it will go down, they sell.

But Baker also shows us the “vision” that carries Frey to the top. He reaches back to his high-school football days for lessons about being “fast” and “aggressive.” He builds a portfolio with both “endurance” and “fast-twitch explosive muscle response.” He has a creed: “Know the market, know your companies … most importantly, know yourself.” Above all, he loads up on Internet stocks, savvily picking out overlooked sleepers like America Online and Amazon. “If it’s white hot, we want in,” says Frey of the latest “piece of shit” dotcom IPO. “If it’s an Internet stock, do it. I don’t care what it is, just put us in it.”

When the biggest bandwagon in stock market history got rolling, Jerry Frey climbed on board with everyone else. That’s the kind of wisdom and expertise you need to take on the Indexes. The payoff? Well, Aggressive Growth beat the Dow and the S&P 500 in 1998. And it almost kept up with the Nasdaq. True, the other two funds Frey managed trailed all the indexes, which rendered his overall performance markedly worse than what you would expect from random chance. Nonetheless Frey “beat the competition,” so much so that “the media took notice, and competing money managers took notice.”