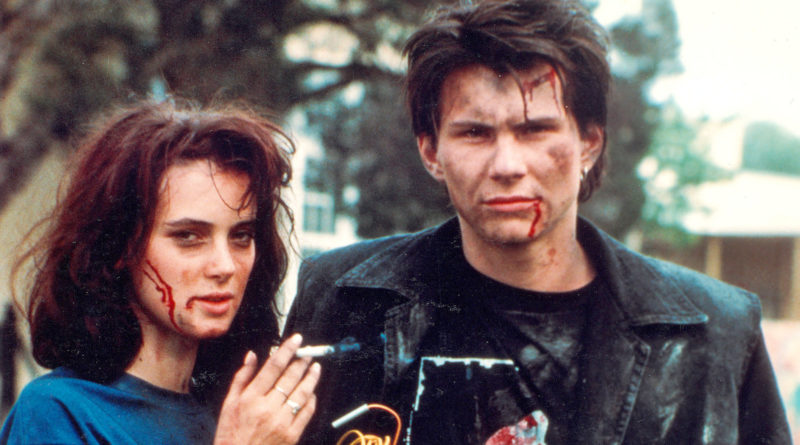 It Deserves All the Revisionism

Recently, Omar Sanchez of The Wrap wrote a 30th-anniversary rethink of Heathers, and not a friendly one. The Heathers fan pile-on began instantly. It lasted more than a week.

Heathers, a 1989 black comedy, aims directly at John Hughes’ oeuvre of upper middle-class teen movies. With archly funny emotional detachment, it depicts the school shootings, date rapes, self-loathing, eating disorders, and petty viciousness that made up high school in the 1980s. Intelligent, cynical Veronica (Winona Ryder) has sold herself out to a popular but horrible high school clique, the Heathers. She reluctantly helps demean and trash other kids and even regularly assists one Heather (Shannen Doherty) by putting a finger down her throat to help with her bulimia. Then JD (Christian Slater) a dark, charismatic new kid, shows up at school. He attracts Veronica by pushing back violently on their cruel little bullying world with guns, poison, and, finally, a bomb.

The ironic, chilled tone of Heathers separates us from feeling too much for these kids, and that’s why it works. I saw it, and got it, when it came out. But I’m the target Gen-X demo for whom it was meant. Sanchez is 24, Generation Z, and had never seen the movie before. He wrote:

“Less than 15 minutes into 1989’s dark comedy “Heathers,” a rebel teenager played by Christian Slater pulls out a gun and fires blanks at two homophobic jocks, a move that would get him arrested today. My roommates and I sat there with our jaws open: Was this supposed to be funny?…

After 30 years, the shocks of real life have reset the Richter scale of offensiveness. What seemed absurd in 1989 feels entirely plausible after Columbine, Parkland, and too many other school atrocities to list.”

Sanchez’s much-shredded essay reads like this all throughout. People accused him of not getting how satire or irony works. Many commenter literati advised him to A Modest Proposal (apparently the only satire that online satire experts have ever read). They accused him of missing the whole point of this socially-critical movie, of being a whiny sensitive snowflake, and being too dumb or naïve to see that his cynical traffic-hungry editor at The Wrap was setting him up to be ratioed on twitter, hung out to dry for the clicks. After all, no one could possibly be serious about not liking Heathers, right?

I watched Heathers again after I read Sanchez’s essay, and he’s absolutely right about the scene 15 minutes in where JD pulls that gun in the cafeteria. If you’re Gen-X, school shootings were something becoming a national epidemic, but nowhere near the Columbine to Parkland nightmare of the last twenty years.

If you’re somewhere between David Hogg and Omar Sanchez’s ages, aka Generation Columbine, you know from the point the gun appears that Heathers has a big red date-stamp on it, ironic or not.  Today they’d expel JD and throw him in jail forever. The school would have gone into a total lockdown, followed by weeks of crisis counselors roaming the halls. Local news crews would be parked out front. We’d see survivor kids hugging their crying parents.

It’s one thing to take a detached cruel, funny view of an awful social condition, but it’s another for a movie’s response to no longer have any basis in reality. It even feels dated that Slater pulls a Colt Python, a Magnum Force-era bad ass weapon of choice. Today kids bring AR-15s or they’re not even trying.

Watching Heathers still makes sense, to a point. Several responses to Sanchez said that Heathers “predicted” what was to come. More accurately, Heather reported on what was happening, and did it pretty well. But no one, not me when Heathers came out, and certainly not the Baby Boomers who made it, could have predicted the escalation of school violence through which Gen Z has lived. From Columbine to Sandy Hook to Parkland, not to mention massacres at movie theaters, malls, and nightclubs, this American generation of kids has known more random violence than any that’s come before.

Not So Gently With A Chainsaw

How problematic is Heathers? As I wrote here recently, I used to love Animal House, but then rape culture became something you can’t not be aware of anymore. What looked radical and anti-establishment in 1978 now looks incredibly pro-establishment and crushingly-retro white-male privileged in 2019.  So, what to make of that extended rape scene played out in the pasture while JD and Veronica talk in the foreground as a jock date-rapes Heather McNamara (Lisanne Falk) for literally minutes of screen time? No, it’s not the same as Animal House, which makes it seem like just more bad-boy behavior. Veronica’s character–legitimately troubled by Slater’s violence in earlier scenes–just ignores what’s happening.

Back when Heathers came out, date-rape scenes in teen movies were pretty common (see Molly Ringwald’s essay in The New Yorker about revisiting her mentor, John Hughes). They all get played off as comedy, and Heathers is no different. It’s not a snickering teen sex-comedy moment. There’s a “well bitch, you said this is what you wanted” cruel irony to it for going out with these jerks (Veronica only went on this double-date as a favor to McNamara). To all the very progressive defenders of Heathers out there: cool. I’m glad you finally found a rape joke you like.

A Lesson In Satire

To all those who felt like giving Omar Sanchez a lesson in satire, here’s one for you. For satire to work, it requires that the satirist and the audience have an agreed upon set of cultural references and understandings. That’s why your English teacher had you read A Modest Proposal. From 1729 when Jonathan Swift published it until now, most people of sense have realized that Swift doesn’t propose boiling up and serving Irish kids for dinner to ease poverty as a real solution. He’s making a cruelly-absurd satirical point about English rule over Ireland. Your teachers gave it to you because it’s hard to get confused about eating children (and it’s short).

Jokes get old, that’s what they do. Your joke got old. You got old.

But school-shooting culture has changed more radically in 30 years than the satirical premise of A Modest Proposal has in nearly 300. For example, it took The Matrix exactly three weeks to get old. That movie opened on March 31, 1999. On April 20, Eric Harris and Dylan Klebold walked into Columbine High School dressed like Neo and Trinity in the office-building lobby scene where they shoot up everything and everyone in sight with automatic weapons and unlimited rounds.

It’s not the movie’s fault two broken human beings did that. The Matrix may be the best action movie made in my lifetime. It’s always in my top 10 of ever. But since I saw it in April of 1999, I have never not flashed on Columbine when the lobby scene starts. The Matrix had 21 days of existing as pure cinema before reality began to deform it.

Reality has been distorting Heathers for 30 years. Defenders of the movie love pointing out how it’s an answer to John Hughes movies like Sixteen Candles and Ferris Bueller’s Day Off.  But they leave out a reason why it worked so well in 1989 and maybe not so well now. It’s an answer to Hughes, yes. But it’s one in a long line of pretty heartless depictions of Gen X.

Start with Tatum O’Neal’s kindergarten grifter in Paper Moon. Then O’Neal plays baseball a few years later with the racist little shits and their neglectful parents in The Bad News Bears. Bugsy Malone, in its Muppet way, presents us as hoods and whores and scumbags. Even Rosemary’s baby is an Xer. We had tween hookers Jodie Foster in Taxi Driver and Brooke Shields in Pretty Baby.  The Omen, My Bodyguard, Over the Edge (“A kid who tells on another kid is a dead kid”), Foxes, Repo Man, River’s Edge–Gen-X’s cinematic childhood contained an unsurpassed amount of racism, crime, murder, shitty parents, rape, and sexual abuse.

Heathers shares a lineage of cold moral indifference with those movies. Xers in 1989 were perhaps less shocked by kids depicted like that then audiences today. Gen X didn’t make those movies, but we were the target audience for many of them, and they’re not talking about anyone else. But that was a long time ago.”

The resistance to Sanchez’s piece arose because people who usually consider themselves progressive and hip got schooled on how not progressive and not hip their problematic fav is. Your joke grew old, Millennial, and so did you. It happens. I remember when it happened to me.

I was watching Juno. Jason Bateman plays this cool indie rock guy living in a big house his materialist wife, who wants a family, is pushing on him. Or so I thought. Ellen Page likes him at first, but then when we realize he’s the self-absorbed one (the role usually set aside for boomers in Gen X movies), Ellen Page says to him. “Oh and you know what? I bought another Sonic Youth album and it sucked… it’s just noise.”

“Wtf? Noise? Sonic Youth?” I thought I’d heard it wrong. Could these low-fi emo millennial twerps be that unaware of how important SY is? Do they not now know that Sonic Youth challenged all the precepts of commercialized musical blah-de-blah-di-dah. Oh shut up, old man.

My idea of cool got old. A generation of people who never saw Sonic Youth live will only know them from their, uh, admittedly mixed recorded output. They will just never get it.

Lenny Bruce used to say there’s nothing sadder than an aging hipster. Jokes get old, that’s what they do. Your joke got old. You got old. Go get fitted for your mom jeans, shave your head so no one thinks you’re going bald. Your Cultural Revolution is here, get ready to wear the dunce cap and get paraded in the streets by Gen Z with a “problematic” sign hung around your neck. Get used to hearing how Beyoncé, The Simpsons, The Hunger Games, and every other untouchable final word of your generational brand is objectively bad and laughably late capitalist.

As Veronica would say, “There’s a new sheriff in town.” And you’re not it.

12 thoughts on “Heathers Got Old and So Did You”