Lose yourself in a vast fictional world for a while

When I feel stressed, there’s nothing I’d rather do than dive down deep into a fictional world full of happenings that in no way resemble my actual life. A standalone novel is fine for a few hours of company, but a juicy book series means days, if not weeks, full of diversion. Right now, perhaps we all could use a little stay-in-place escapism, and there are only so many times one can read Harry Potter. Those dark future novels we’ve been digging for the past decade? Well, maybe this isn’t quite the juncture for those. There are plenty of other hefty book series out there to check out, in any genre a reader might fancy.

The Dresden Files by Jim Butcher

Years ago, a coworker asked if I’d ever read Jim Butcher’s wizard detective book series, The Dresden Files. The phrase “wizard detective” is enough to catch my attention in just about any circumstance, so I checked them out and honestly, fell a little bit in love.

The first novel in the series, Storm Front, opens with the line, “Wizards are cool,” and well, duh, yeah they are. Harry Dresden is a modern wizard who makes his living investigating supernatural crimes for the Chicago PD and private clients. Magic interferes with technology, so Harry bumbles along mostly off the grid, armed with only his wits, his Smith & Wesson, some magical jewelry, and an enchanted leather duster. Wizarding doesn’t pay much, so Harry lives in a sketchy basement apartment with Bob, an enchanted spirit in trapped in a skull, and Mister, a chunky, Coca-Cola slurping cat.

Anyone coveting a hard-boiled detective novel that also features vampires and werewolves will find the goods in Harry’s world, which consists of fifteen novels, two short story collections, a series of graphic novels, and even a role-playing and tabletop game.

The Greatest Knight by Elizabeth Chadwick 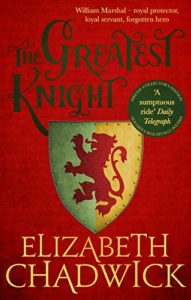 While Phillipa Gregory may rule the historical novel kingdom with her prodigious volumes about the Plantagenets and Tudors, Elizabeth Chadwick churns out some pretty fantastic novels, too. Her series about William Marshal, starting with The Greatest Knight, is a particularly transporting read. The real marshal became a knight, found himself held for ransom by Eleanor of Aquitaine, and served under Henry II, Richard the Lionhearted, and King John.

During his esteemed existence, Marshal also found time to have ten kids, work in a pilgrimage to the Holy Land, and witness the signing of the Magna Carta. His life gets the thorough exploration it deserves in Chadwick’s series. She claims to access the Akashic Records to portray her characters as accurately possible, and I appreciate her candor, because other authors say they rely on research and fancy themselves historians. Whatever Chadwick’s methodology, it makes for an engrossing read.

Before falling into the world of Crazy Rich Asians, I knew nothing of Singaporean slang, the distinctive street food experience, or the insane old-money shenanigans of the “established” families, but it’s how author Kevin Kwan grew up. He’s taken his experiences and concocted a fun, soapy trilogy of adventures. Lest we, the reader, feel too outside it all, he’s anchored the series around everywoman Rachel, a humble professor of economics raised by a single mom in Cupertino, CA. Rachel’s boyfriend Nick gets some serious feels, and invites Rachel home to attend his best friend’s wedding and meet his family. In true boys-don’t-tell-stories-with-details fashion, Nick fails to mention his family’s Mansa Musa-level wealth and social standing, which causes quite a rift with Rachel. Whoops.

I never got into the Wheel of Time series, because even though the books are appealingly thick, something about them is far too silly. For instance, Robert Jordan calls his bad guy The Dark One, and dealing with him involves reaching past/for/around his taint. As a grown woman who is mentally 14, I can’t get past his taint to get to the goods. When  Jordan died, another writer with a prodigious output took over. This is how Brandon Sanderson first caught my attention, which led to a read of his excellent escapist fantasy book series, Mistborn. The first book opens on a world where a prophesized hero took on the villain, but lost. For 1000 years now, the people have suffered through their evil ruler’s cruel reign. The red sky is barren, ash constantly rains down, and at night, unsettling mists take over the land. Fed up with the state of the world, and having nothing to lose, ragtag orphan Vin joins forces with escaped convict Kelsier and his gang, who intend to learn the Lord Ruler’s secrets so they can overthrow him and free all the people of the land.

The series is flush with cool magic, a world steeped in history, a fantastical array of creatures, and most importantly, writing that wraps itself around a reader and squeezes tight. The original Mistborn trilogy takes place in a pre-technological world, while the follow-up trilogy is set in the Old West. Sanderson plans to continue the world expansion with two more trilogies, and this is like a gateway series that leads right into all his other beefy works of fantasy.

My late mother belonged to a book club, and often asked for help finding reads for the ladies who didn’t care for an abundance of sex, violence, or harsh language. When I suggested Still Life, the first of Louise Penny’s Chief Inspector Gamache book series, she delighted in sharing it with her friends. Head of Homicide in the Sûreté du Quebec, Armand Gamache loves a hot café au lait, a licorice pipe, and solving mysteries to bring justice to the dead. Often, his crime-solving leads him to the rural town of Three Pines, just north of the US border, where he interacts with the eccentric locals who aren’t used to intruders from the Big City.

The character-driven series mashes up crime procedure and cozy mystery, against the backdrop of old Canada. There are currently fifteen books, a novella, a cookbook, and for world travelers, there are plenty of ways to go see the sights of Gamache’s world firsthand. When we leave our houses again. Until then, there’s plenty to keep a reader occupied, though be forewarned, an order of licorice pipes from Amazon may become a necessary component of your immediate future.