A Fun-Enough Live-Action Romp in the Jungle

Dora the Explorer is not sexy enough and I for one am furious! I can’t believe this film made for and marketed to children did not arouse me! Dora and her cousin never locked lips despite what I was certain were visible hormones flying all over the place.

OK just kidding, the movie was exactly what it should be, a fun children’s adventure. I didn’t know much about Dora before watching it, but I had seen approximately 13 previews for the film before reading Todd McCarthy’s recent viral Hollywood Reporter Review, which was icky enough to distract us momentarily from the horrors of 2019. The number of times Todd uses “hormonal” in the piece creeps me out, but that’s not even the worst part.

He bemoans that nothing comes to pass despite the throbbing (yes he used throbbing) hormones beneath the surface, and says that while he enjoyed gazing at Isabella Moner “who’s actually 18 and looks it despite preventive measures,” the actors are far too mature for the roles they play, and it distracted him that they did not hook up like he wanted them to. For the record, Moner gave a delightful performance in the film, and playing Dora seems to mean a lot to her. Also, she turned 18 this July, so she was actually 17 during filming despite ‘preventive measures’. Even more relevant, the man Todd imagines she has tension with is her first cousin, Diego. Glad they didn’t hook up, to be honest.

I’m not sure what he expected from this movie, but I wasn’t surprised – it’s a fun, lively adventure movie suitable for kids, but amusing for adults. That sentence sounds bland, and maybe that tells you a little something about the movie. I liked it, but I’m not telling you to run out and see it. 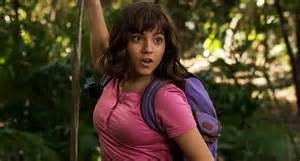 The film reminded me of other fun children’s fare like Goosebumps 2, which featured a slightly scary story aimed at kids that adults could still enjoy. Solid jokes, hijinks, and fun. A big bad guy looms over them, making for a predictable but enjoyable plot twist. He’s a villain, but a PG villain.

There were not nearly as many hormones flying around the jungle as I was led to believe. Dora is friendly, but largely uninterested in dating. She’s a wholesome, hyper-energetic genius who speaks multiple languages and outwits mercenaries. Frankly, it’s not surprising she doesn’t have time for hookups, but there is a sweet jungle romance that brews, and even has a kiss. The plot involves a little bit of history, and a little bit of action.

Dora and her cousin Diego (Jeffrey Wahlberg, yes of those Wahlbergs) even have a hilarious adult scene where they get seriously stoned off jungle mist. Everyone turns briefly into cartoons, and we’re all laughing because temporary acid trips are hysterical. Truly one of my favorite scenes in this film and its adult counterpart, Booksmart.

I’d describe it as Disney Channel Original Movie but slightly more expensive looking – not super high quality, but worth a watch. If I had a Dora-loving kid, I would be subjecting myself to this movie repeatedly to keep them happy.

Personally, I’m glad to see hormones left out of a movie aimed at kids. I wish more movies for adults followed suit. While I love a good romantic comedy, sometimes it feels like filmmakers forget about the importance of friendship – and the intense drama it can contain.