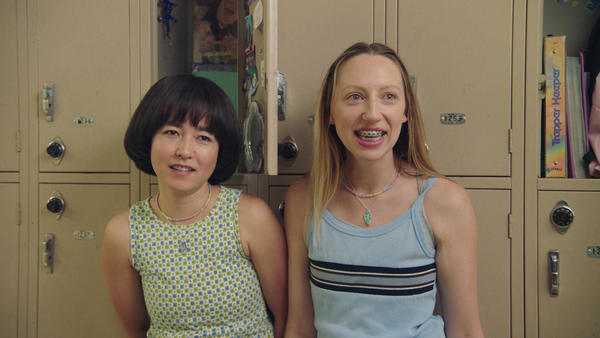 I have to imagine there’s a degree of universality to Hulu’s Pen15 and its viscerally awkward comedy of pre-teen errors. I can only imagine this, because as a contemporary of the show’s creators, the specificity of a middle school setting in the year 2000 gave me the eerie sense of watching scenes from my own life unfold on screen.

Perhaps the show’s title itself acts as a bellwether for its margin of appreciation; either you get what it means to be in the Pen15 Club, or you don’t. And if you fall into the latter camp, might I suggest that you write it upon your hand as an initiation rite, as we did so many moons ago, and wait for passersby to gleefully bestow its meaning upon you (hint: PENIS PENIS PENIS, heehee heehee hee).

The show centers on the coming-of-age foibles of Maya and Anna, a pair of ride-or-die besties doing their best to navigate the horrors of the 7th grade together. Maya Erskine and Anna Konkle (who created the show along with Sam Zvibleman) give life to these 13-year-old versions of themselves, while the rest of the cast is age-appropriate.

Their performances, to which you acclimate quickly, bring to mind some of Chris Lilley’s better roles, where you genuinely forget that you’re watching a man in a wig and schoolgirl uniform, and not a bona fide teenager. This stylistic conceit feels appropriate for a show geared to an adult audience reflecting on its youth. It allows the actors, with their fully-formed emotional tool sets, to amplify the absurdly apocalyptic histrionics of this age to both humorous and gut-wrenching effect.

Watching a grown-ass woman mimic the yearnings of an adolescent in the face of an actual 13-year-old co-star never gets old (have no fear, they used body doubles for anything too intimate). It reminds us that no matter their cute haircuts or cool posturings, middle school boys are babies. It’s supremely silly that we, at one time, pined for them.

As Maya and Anna tie up their landline in the opening scene (getting interrupted, of course, by Maya’s brother Shuji logging on to AOL), we learn the social pecking order at their school. They make a pact to do all of their firsts together, even their first kiss. This provides a means to track their inconsistent rates of personal growth and foreshadows tension that may arise in their seemingly ironclad friendship.

Maya’s anxiety over her lack of maturation causes her to attempt, and botch, a chunky haircut, which her mom “fixes” into a cringe-inducing bowl cut. The other kids label her UGIS (Ugliest Girl in School), and she must learn the ways of shit-talking from her brother in order to defend her honor. Anna sticks with her throughout the mortifying ordeal.

In a satisfying season, a few of the episodes stand out as true gems. “AIM” takes place largely in that virtual landscape where we idled so many of our days. The show nails the social peccadilloes of the early internet as Maya and Anna dither over choosing a screenname or interpreting their crush’s away message. Maya’s obsessive and wildly untruthful IM “relationship” with a stranger she met in a chatroom could serve as a time capsule for future anthropologists looking to understand the formative mating rituals of pre-teenage millennials.

“Posh” digs into the low-key white supremacy of the American suburbs with a nuance that one rarely sees in a half-hour comedy. While emulating the Spice Girls for a school project, basic bitch Becca tells Maya that she has to be Scary Spice and play servant to the others, since she’s the only member of the group who isn’t white. Anna, recognizing her friend has been othered but ill-equipped to address the issue, tries to make Maya feel better by accidentally calling attention to Maya’s non-whiteness at school and making the situation so much worse. This is far and away the most uncomfortable of the show’s many uncomfortable-making moments. You can’t help but admire them for digging into this topic with a spoonful of humor and compassion.

While Pen15 retreads a number of familiar tropes, it’s also quietly revolutionary. It examines so many aspects of female interiority beyond the old chestnut of girls competing for male attention. In fact, Maya and Anna get along so well in the early episodes that I felt a little conflicted; as nice as it was to see these two teenage girls supporting each other through trying times, I began to doubt the realism of this dynamic.

Are You There God? It’s Me, Maya

However, the show explodes the underlying tension between the two friends in its penultimate episode, where it also tackles the “Are You There God? It’s Me, Margaret” moment. When Maya learns that Anna will be staying at her house for a few days while her parents are on a retreat to reckon with their failing marriage, she’s beyond excited. I buried my face into my wife’s shoulder, wincing. “Oh God, a multi-day sleepover. They’re gonna be so mean to each other.”

Maya Erskine displays her full acting chops here. She careens from a performative mania to a sense of deep resentment as her friend unwittingly upstages her on her own turf. Throughout the series, she channels the paradox of early adolescence with an ever-shifting vocal range that could become grating in less able hands, playing up a Bart Simpson-like coolness when she’s with her friends, then devolving into a high-pitched witty-bitty baby voice when she’s at home with her family.

Within this episode, her performance boils to a fever pitch that matches her character’s unsteady response to her encroaching womanhood. Seeing her mother extend the tiniest bit of maternal kindness to Anna sends Maya spiraling into complete regression, with poor Anna bearing the brunt of Maya’s tantrum at a time when she needs her friend the most. Instead of peddling any mawkish platitudes or obligatory scenes of blood-stained confusion, we get something a little closer to the reality of a first period: the relief of understanding your own shitty behavior mixed with the fear of feeling like the ground is shifting below your feet.

For all of its laugh-out-loud moments, Pen15 truly makes its mark with the layers of emotional realism balanced by the performances of its 30-something stars. While the specifics of adolescence in the year 2000 might resonate deepest within a certain age group, I’d wager the charms of this show could win over anyone with an appreciation for the folly of the young human condition.